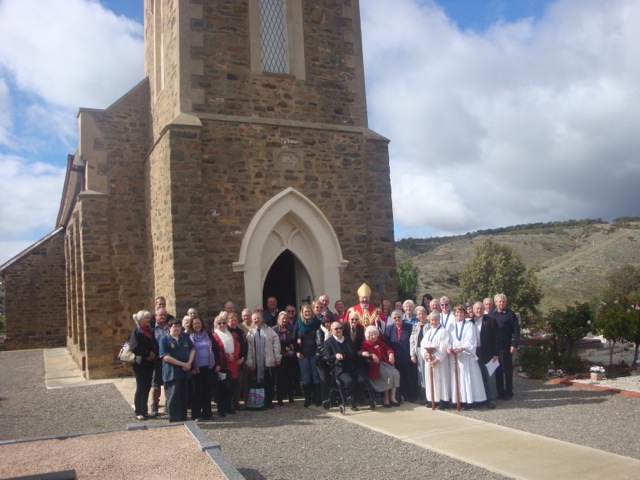 The church of St Philip and St James is positioned at Church Hill Road, on the hill overlooking the serene village of Old Noarlunga.

The foundation stone for the church, seating 100, was laid by Bishop Short in March 1850, a mere 14 years after proclamation of the State of South Australia. At the time, a regular cattle market was held in the township’s Market Square, there was a flour mill beside the river and river trade to Port Noarlunga.

The church, with its nave and 56-foot-high tower, was a very substantial structure to have been contemplated at that time and demonstrates the spirit and strength of faith of those early Anglicans. Stone for the church was quarried from the riverbank below, brought up the very steep hill by bullock carts and then by a winch anchored to a rocky outcrop in the church yard. This can still be seen, marked by a plaque, among the gravestones to the south of the church tower. The building was dedicated and ready for use in May 1852. The earliest grave in the adjacent cemetery is dated 1852.

In 1863 improvements and extensions were made to allow for a sanctuary, chancel and vestry, and the earthen floor was covered in slate flagging. The windows, formerly covered in hessian, were glazed with lead-lights and the roof was re-slated. 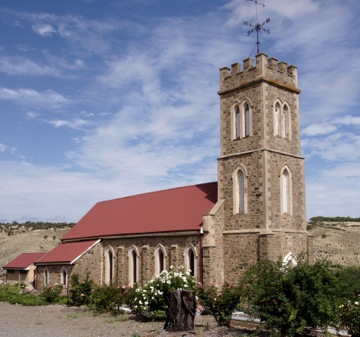 In the early 1900s, further restoration took place. This included wooden flooring and, in 1915, the installation of the beautiful east window.  Several renovations/restorations have occurred over subsequent years, including the replacing of the slate-tiled roof with corrugated iron. In 2003, a Cemetery Curator’s storeroom and bathroom were built at the eastern end.

Services held by lamplight have been a feature over recent years, despite the connection of electricity by donation in about 1992.

The church building is currently for sale, but the cemetery is still cared for lovingly. The building is State Heritage listed (1985) and the site is of significant interest. Recently, interested birdwatchers have suspended a nesting box on the tower to attract peregrine falcons. Fire fighters perform practice drill on the steep cliffs to the east of the church.